A Book About a Film is the fourth novel by C. W. Schultz, which details a lost film and follows paranormal journalist Joe Fischer as he hunts a secret society that knows the meaning of life and what comes after death. It was released on Tuesday, September 8, 2015.

An academic study on the cult classic The Cornfield People, A Book About a Film not only acts as a novelization of the movie but also dedicates a great amount of its content to the film’s hidden messages, reoccurring themes and haunting obscurity. Some have called The Cornfield People an incomplete film, while others believe it is a true lost film; however, many think that the film is banned and have pointed out that sites which attempt to host images or clips from the movie have suspiciously removed the content even though there is no trace of The Cornfield People ever being copyrighted.

The main narrative had already been drafted as early as 2010, but it ended up being set aside for lack of funding and also so that Schultz could pursue other projects. In mid-2012, when Jill was being copy-edited, Schultz was revisiting scrapped projects for consideration of turning them into his next book. “I saw a second story to tell alongside the one already completed for The Cornfield People, where the separate narratives acted as companions with each other in a very House of Leaves-esque sort of way,” Schultz explains.

Mark [Z. Danielewski]’s motivation and my motivation for using copious footnotes have similarities and differences. For one, there’s no denying that my book would not exist without his. Secondly, footnotes help with authentication, whether or not the subject is actually non-fiction. However, House of Leaves intentionally disorients its reader with the story-structure, and it manipulates the mood with its unpredictable page-layout; A Book About a Film, on the other hand, simply wants to give every angle of a movie’s viewing experience through words on paper, which includes commentary, goofs, reception and trivia all at once so the reader has a harder time picking and choosing what can be glossed over—it’s not a magazine where you pick which article you want to read, I wrote A Book About a Film with the intention that the reader would read everything in front of them. You can do this with footnotes but not with end-notes, which is something very few copy-editors understood.

On July 22, 2014, it was reported that Schultz has already finished a draft of a fourth book. He had originally planned to start in April 2013 and have a presentable draft by the end of the year; however, due to the “complex nature” of the book, Schultz said that he didn’t get things rolling until October 2013, which involved at least three false-starts with writing the book.

In April 2013, Schultz announced plans for a children’s book and a potential series, to which he revealed a longtime interest in exploring all types of genres, styles and subjects, and that writing a children’s book was merely an example of that interest and it should not be interpreted as a move in an overall different career path. In January 2014, Schultz went into even more detail, saying: “The fourth book will be for adults, just like the first three.” In terms of content, Schultz vaguely explained: “I don’t want to piss people off… but, sometimes controversy is necessary.”

On March 30, 2014, Schultz tweeted that the word-count had reached past 40,000, officially exceeding the minimum length of a novel (according to Science Fiction and Fantasy Writers of America); and on April 12, 2014, Schultz tweeted that he is officially 2/3 of the way finished with a first draft. On May 11, 2014 (Mother’s Day), Schultz reported the following to www.cwschultz.com:

I reached a 55,600 word-count today. That’s officially longer than Yeval, which I believe is just around 55,000 words. Now, higher word-count does not mean higher quality. No! But the fact that I have a published book shorter than the one I’m currently working on really puts into perspective the fact that A Book About a Film is really happening, and that makes me very excited! There were a lot of projects up my sleeve at the time I started A Book About a Film, and I honestly didn’t know if I was going to follow through with it or if I was going to cancel it or if I was going to get sidetracked or whatever. The get-go on this book was definitely my most difficult. I had three false-starts, starting a new version from scratch almost every eight weeks, before I actually reached this point-of-no-return, and I’m just thrilled to let the world see it within, hopefully, the next year or so. 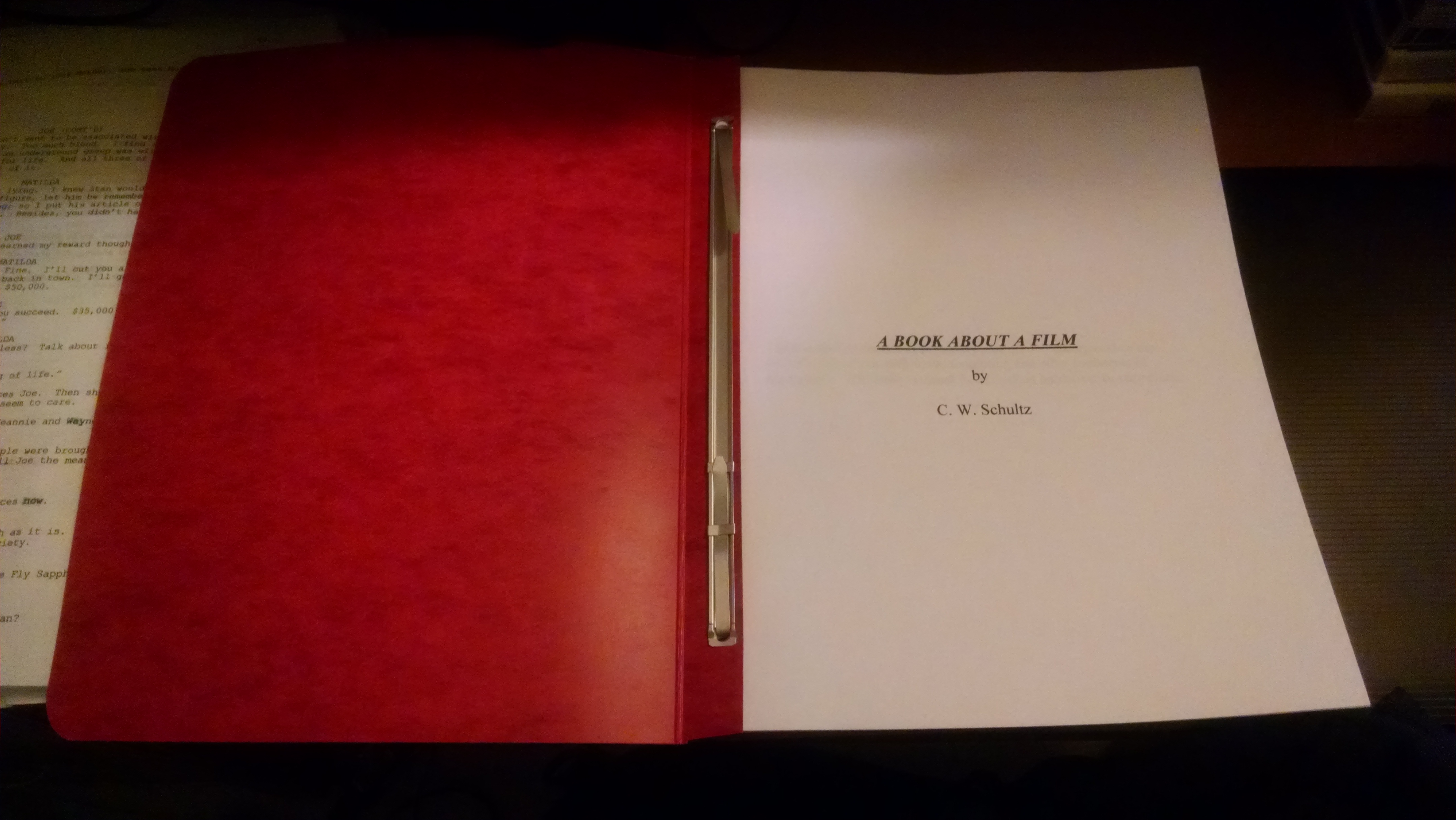 It was reported on November 1, 2014, that a draft was printed for official copyediting. The manuscript is approximately 80,000 words. 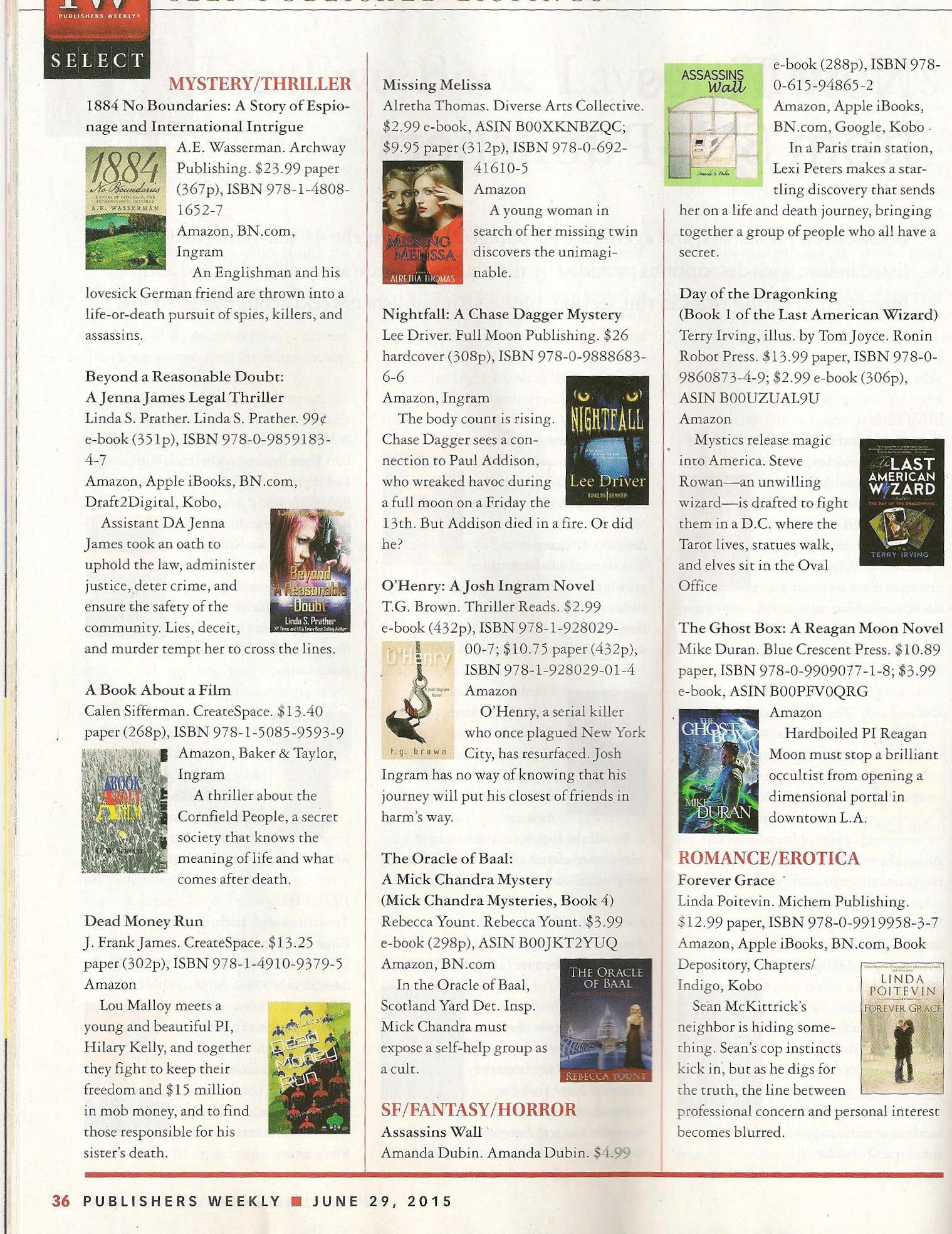 Marketing for A Book About a Film began as early as December 2014, when controversies for the comedy The Interview caused its theatrical release to be pulled, which sparked conversation of other titles in cinema history being banned or postponed including the book’s subject The Cornfield People. Geeky Randy (aka “The Geekster”) of Geekster On Movies mentions The Cornfield People thoroughly on his blog and in his annual releases of Geekster Guide, as well as several references to A Book About a Film and some of Schultz’s other works.

Reviews of A Book About a Film have been mostly positive. Nick Rossi of Reading Other People said “Schultz is destined for greatness” in his review; while Joanie Chevalier, author of Deadly Dating Games: Murder. Blackmail. Romance., gave A Book About a Film ★★★★★ (out of five) in her review.

Ajoobacats Blog commended the book for being original and unusual, saying “this is one hell of a read for film enthusiasts”, but considered the formatting incredibly difficult for an e-book read; ultimately giving it a ★★★★ (out of five) in the review. Luxury Reading also gave A Book About a Film ★★★★ (out of five), noting that it’s similar to but less abstract than House of Leaves, saying it’s “a magnificent, multi-faceted tale” and “something more than just a good suspense thriller”. An overall rave review came from RedPillows, and despite saying “[t]he story does fall a little flat at times where a sense of mystery is created”, the book was ultimately considered intriguing and well-written.

Schultz’s narrative choices was said to be “complex, gripping, and ultimately hard to put down” in a review from Diane Donovan at the Midwest Book Review.

“A story with a great premise that never quite takes flight,” is what Kirkus had to say in their response that was a little more mixed than other reviews. They called the plot “tangled, [but] that’s sort of the point” and said that Schultz “unfortunately gets in his own way when it comes to its execution”, while the story itself is “undercut by its jocular tone”, concluding that “[a]lthough this book is fun at times, readers will be left wishing that it had just a bit more polish.” Writer’s Digest judged the book critically for being difficult to follow when it came to its conspiracy, footnotes, narrative style and puzzles.

Note: This section does not include differences found in Advance Review Copies.

E-book, hardcover and paperback editions of A Book About a Film are available, each one different from the other. At the beginning of the book, Schultz clearly advises against reading the Kindle edition due to the device’s inability to translate the complex page layout. E-book giveaways were avoided to discourage the sale of the Kindle edition. Schultz recommends the hardcover edition over the paperback edition, and the paperback edition over the e-book edition. Below is an incomplete list of the differences between the three editions:

There are currently five different batches of the hardcovers in circulation. Batch E is the only version now being printed, and is available upon request. Bookstores’ first-time orders have the hardcover copies delivered, while all reorders are paperback. The differences between the hardcover prints and the Kindle or paperback editions are:

– all interviewees’ names are visible
– interior blurbs moved to the very front page
– plot summary moved to the jacket sleeves
– the spine has a black background, with the title and author appearing in a different typeface than the paperback edition, and “C. W. Schultz” appearing in white instead of black

– back cover has blurbs written over the cornfield photo, resulting in a camouflage effect; and the white silhouette appears in the upper-left corner
– Joanie Chevalier’s blurb has been moved to the front cover, directly above the title-card

– Joanie Chevalier’s blurb has been moved to the back cover, and the white silhouette has been enlarged in the foreground; appearing exactly like the paperback edition

– all prints after Batch C are essentially the same, with mostly unnoticeable rearrangements. To smooth out a few sentences, some minor placement adjustments and shifts were made to such words as: “almost”, “ask”, “climactic”, “just”, “lay”, “only”, “reply”, “says” and “whom”.

The paperback edition is the most popular print of the book because it’s carried by Amazon, the publisher and other online retailers. Bookstores carry this version upon reorder, while hardcover prints are from first-time orders. The differences between the paperback prints and the hardcover or Kindles editions are:
– interviewee’s identities are concealed through redaction
– the spine has the same background as the front and back covers, with the title and author appearing in a different typeface than the hardcover edition, and “C. W. Schultz” appearing in black instead of white

Goodreads reviews for A Book About A Film